I arrived in Delhi the day after Diwali. I can’t actually believe I missed Diwali, it’s something I knew about and should have checked for. Everything was still decorated for Diwali though which was fun to see, and there were some post Diwali fireworks at night. Delhi is huge, it has 26 million people in it’s urban area making it the 2nd largest urban area in the world. 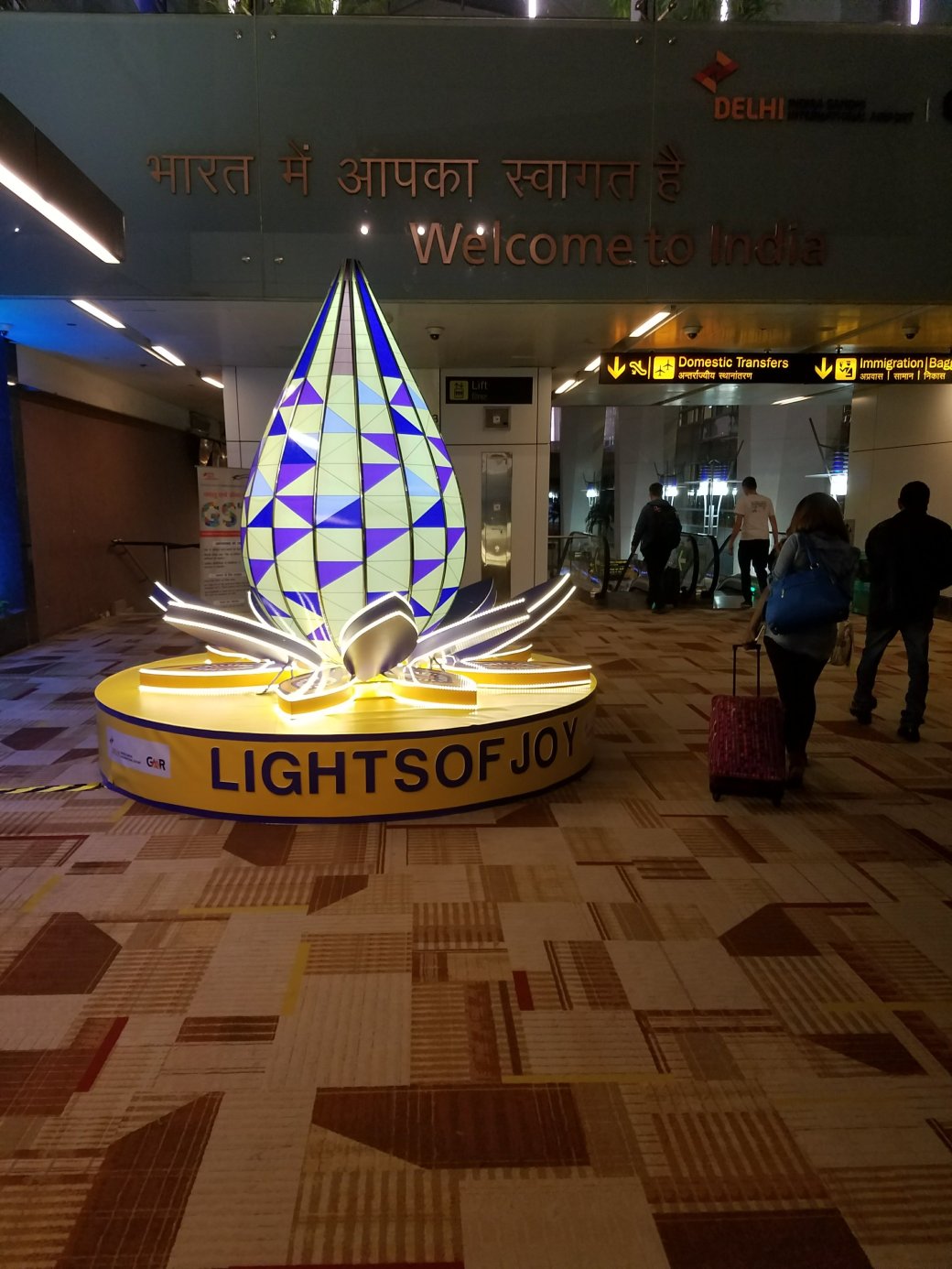 The smog in Delhi was rough. It’s doubly unfortunate that I arrived the day after Diwali since due to the firecrackers smog increased by about 24%. One doctor claims breathing in Delhi was like smoking 50 cigarettes a day. I’ve talked to people that were visiting before Diwali and they said the smog wasn’t nearly as bad. Also, Delhi had no clouds…

Friday I was Jet lagged. Not so much from the timezone change as much as it was from staying up all night. I would have slept on the plane but I was watching the new Magnificent Seven and then Fantastic Beasts and Where to Find Them, so there was little time for sleep. After recovering, I met some people from the UK and we walked around the market near our hostel and had drinks on the roof.

Saturday I met some people from South Carolina, Miami (via Thailand), Iowa, and Spain. Emily, Gen, Ruvim, and Daniel, respectively. We went to see the Red fort near Old Delhi. We didn’t go inside though.

We walked around Old Delhi until we found the Bazar. Crossing the street in Delhi is literally walking through traffic on a busy road. It gets easier the more you do it… like Frogger. Walking through Delhi was very similar to Marrakech, Morocco, in that you share the road with cars, motorcycles, and sometimes a cow.

Sunday me and Emily ventured out into Delhi. We Ubered to Hauz Khas for lunch where we found a tasty Himalayan restaurant. After lunch we explored Munda Gumbad, some nearby ruins.

Then we hopped on the subway to go to Ghandi Smriti, a museum about Ghandi in a the house where he was assassinated. We spent a long time reading about Ghandi, his life,  and his role in India’s Independence from the British.

After getting kicked out of Ghandi Smriti due to closing time, we tuk tuk‘ed over to the India Gate. Then we had dinner near a clothing Bazar before heading home.

Monday I went to Agra to see the Taj Mahal with two people from London and one from Korea from San Diego. It was a 3 hour car ride each way from Delhi to Agra. The Taj Mahal was worth the trip. Afterward we stopped at Fort Agra. 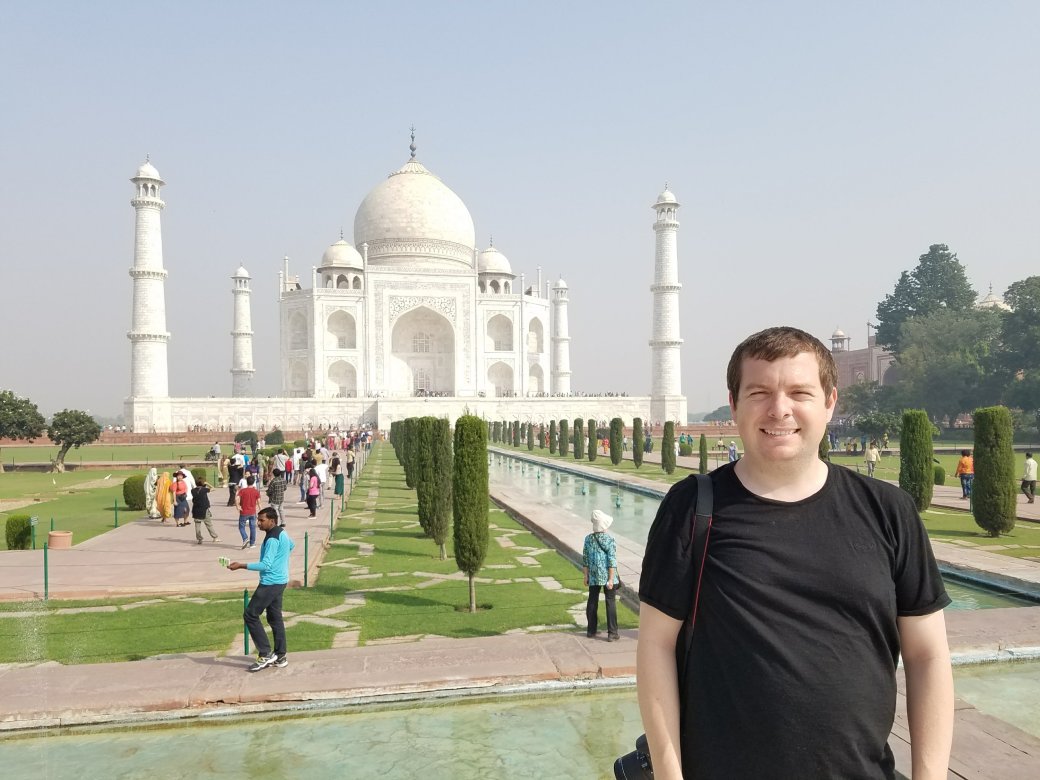 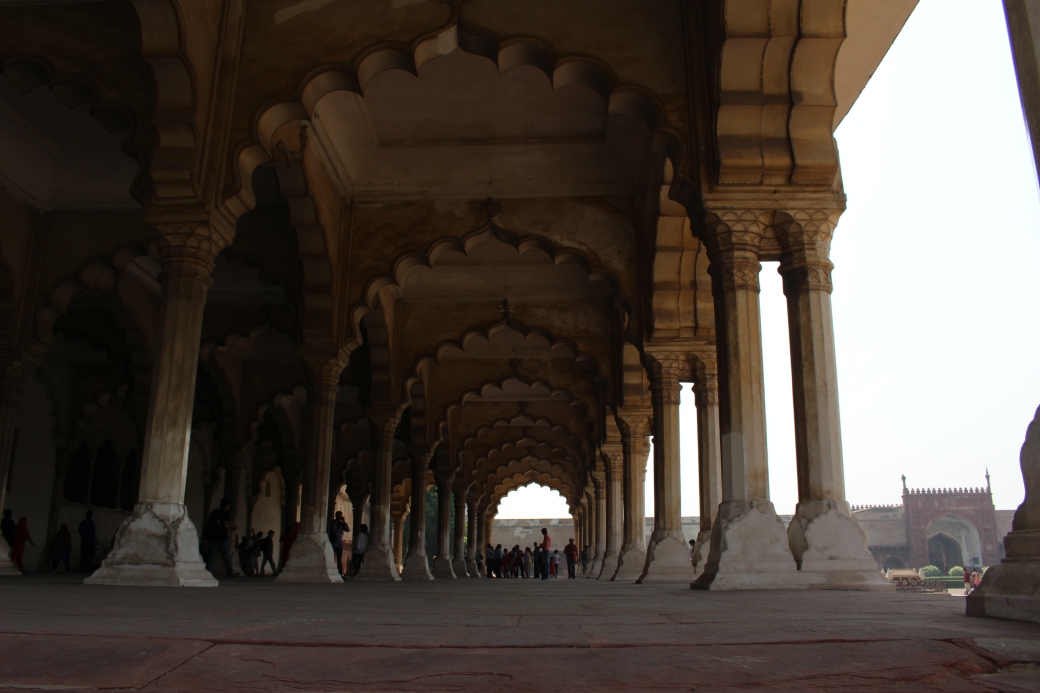 Tuesday I took the train from Delhi to Pushkar. Pushkar was hosting a camel and livestock festival the next week which is the largest in India. People come from all over to buy and sell camels. Unfortunately the shipping of a camel back to Pittsburgh is prohibitively expensive, and I don’t know if it would get along with the cats. The fair was the next week so I won’t be there for it, but we could see them preparing for it. They had four Ferris wheels setup and the camels were everywhere.

It was a seven hour train ride from Delhi, so after some much needed lunch, Ciara from Kentucky at the hostel mentioned that she was going on a camel ride at sunset. It was organized through the hostel and I was able to join. Just by chance, Gen, Ruvim, and Daniel from Delhi were taking a day trip to Pushkar from Jaipur and were on the same camel ride. Not so big of a world I guess.

I had been camel riding once before in Morocco which was incredibly uncomfortable and tiring. I must be in better shape now than I was then, or maybe they’ve upgraded their camel software to a newer release in India, because riding was much easier than it was in Morocco. 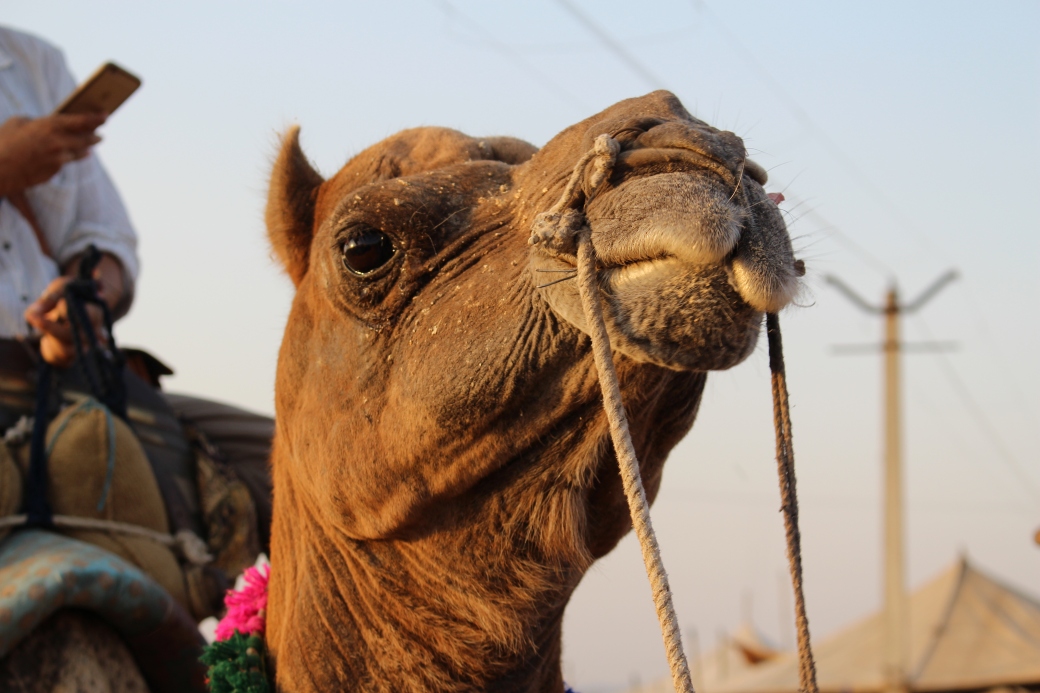 Speaking of Morocco, the hostel was setup exactly like a Moroccan Riad, with open balconies in the middle, a fountain at the bottom, and a great roof deck on top. Alcohol and meat are illegal in Pushkar though so there was no bottomless supply of red wine this time. The view was excellent. 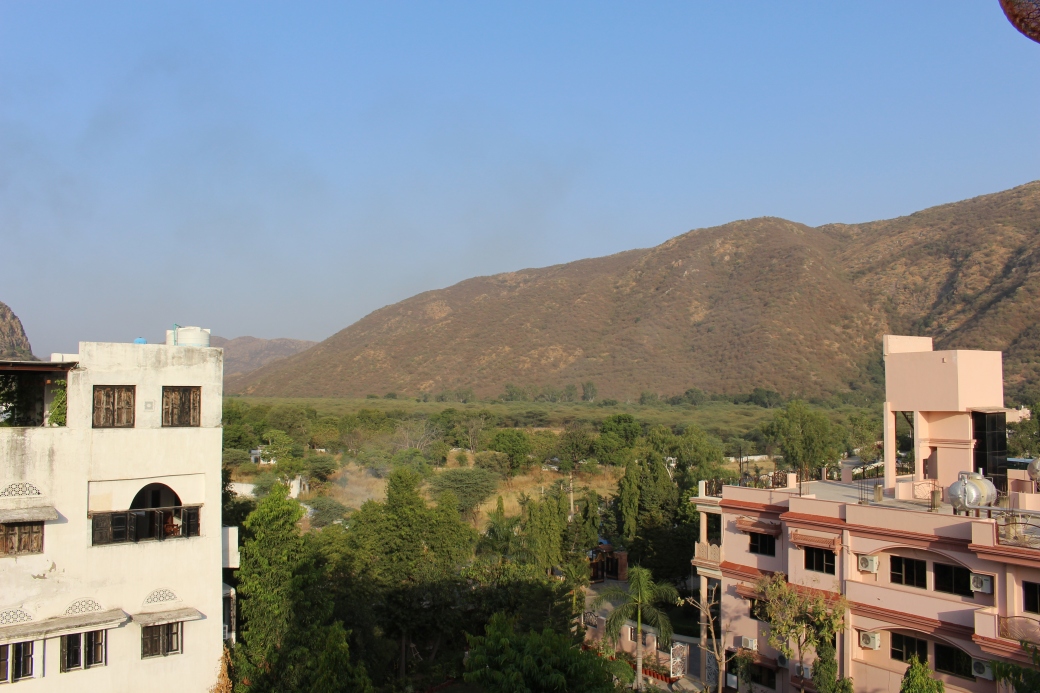 Wednesday I spent much of the day recovering from the camel ride. Later I met Emily and Daniel again and we went on a Pushkar adventure through the market and saw the holy lake. 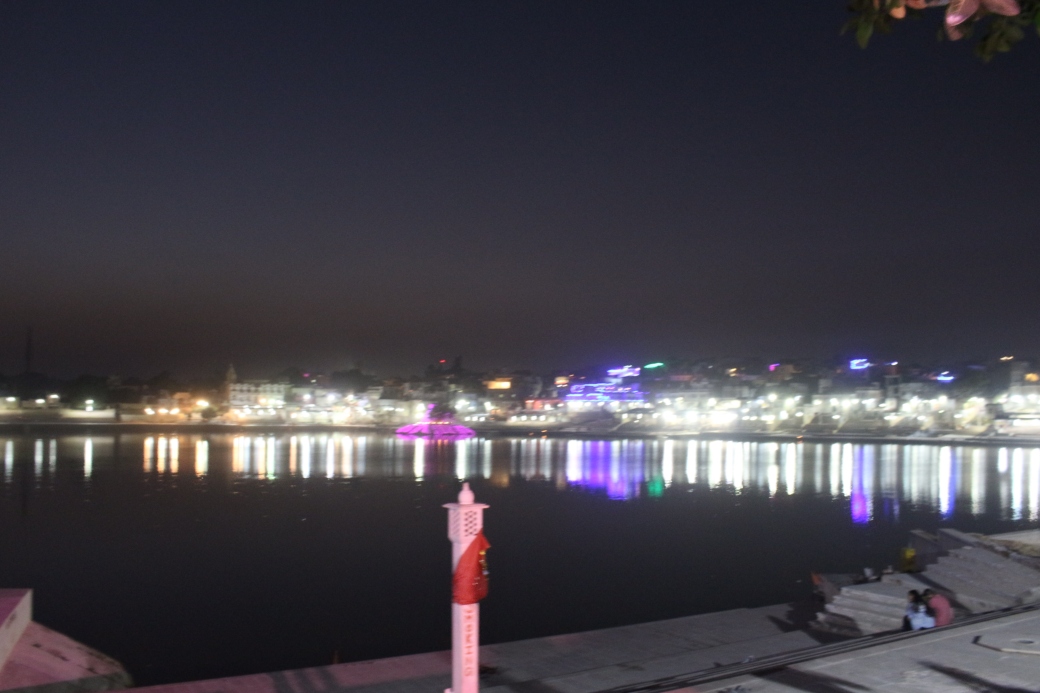 Thursday we tried to visit a Brahma Temple but they wouldn’t let us in with bags or cameras which we all had. We watched some monkeys which came really close, and ended up going to see the camel fair ground which looked mostly set up. We had to decline serval camel taxi offers.

India as been wonderful so far, and Pushkar was one of my favorites. There is a path backpackers seem to follow, from Delhi to Agra to Jaipur to Pushkar to Udiapur to Mumbai or Goa. It goes in the other direction as well and we’ve met some people going in that direction. I would have liked to see Udiapur or Mumbai but I couldn’t fit it in with my plans. I’ve put them on the list of places to see. It was really great seeing the same people I met in Delhi again in Pushkar. Pretty much everyone there was more well traveled then me, many of them U.S. expats living in Asia.

The food was delicious. It turns out I know a good deal about Indian food thanks entirely to everyone at Jarus. I had a few chicken tikka masalas, and butter chickens, but I tried some new things, some dal tadka and some chicken biryani and more, there was nothing that wasn’t good. All the garlic Naan and plenty of masala tea.

My hostel in Delhi is my favorite that I’ve stayed at, and the one in Pushkar is probably right behind it. It was so easy to meet people and the staff was incredibly helpful. They organize a daily trip to the Taj Mahal which was 1/3 of the cost of the one I found online. They helped find and book trains, which was not as simple as it is in Europe. U.S. credit cards aren’t accepted for many things, so payment went through them as well.

I went from “I’ve never taken a tuk tuk”, to “sure, we can fit five people in a tuk tuk” fairly quickly. Just to clarify, a tuk tuk only seats three people. I also like saying tuk tuk. I’m terrible at negotiating prices though. On a side note, I once had a lasagna delivered to me via tuk tuk in Morocco. Uber has also been very helpful.

Here are the pictures from New Delhi, Agra, and Pushkar.